Today, we have the luxury of programming frequently called numbers into our cell phones. I suppose I’m dating myself, but I remember dialing my grandmother & grandfather’s number by heart.

A few years into our relationship, Rasheed and I realized we didn’t really know each other’s numbers or anyone else’s for that matter. Since we were dating long distance and often drove hours to see one another, we knew it could be important that we at least memorize one number to call in case the unimaginable occurred so we memorized the other’s number. For years, his were the only numbers my brain could string together from memory. In the case of an emergency (or sheer joy), I dialed his 10 digits. To this day, his is the only number I know by heart.

A few weeks ago, that fact smacked me in the face.

I had to write down my emergency contact on a doctor’s form. For five years, that had been Rasheed. In an instant, it changed to my parents. I’m beyond grateful I have such amazing, supportive parents who are still around to love me and help me right now, but I’d be lying if I said that new reality didn’t hurt.

It hit me again just before boarding the plane home from India. 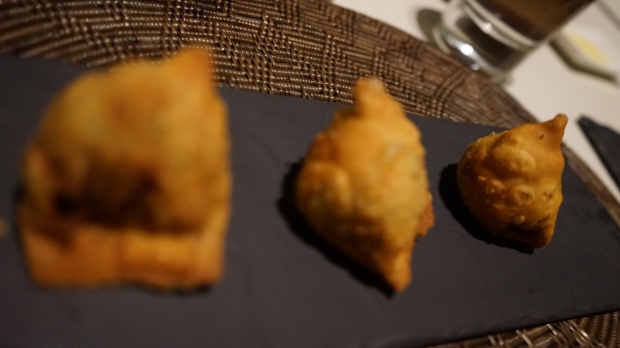 Samosas from the Lodhi Hotel in Delhi

Jamie and I were holding our passports, preparing to hand them to the airline official when I randomly flipped to one of the first pages. There, in plain, blue ink, my new reality stabbed my raw emotions. Uncle Sam had asked for one person he could reach in case the unthinkable happened to me. Rasheed’s name had been scribbled within those blanks just days before our honeymoon—when I had to renew my passport.

For a few seconds, I froze. A lighthearted moment shared between friends turned into a waterworks display in the middle of our line to board the plane. While I do believe he’ll still be there in my last moments, unfortunately, anyone calling his phone number before then won’t receive any help from the other end of the phone.

It’s so difficult to believe my partner is no longer by my side – at least not in an earthly form. I felt so safe and comfortable in his arms. He filled my heart with love. He encouraged my dreams. He made me feel beautiful on the days I felt the opposite. He helped me believe in myself in the moments I wanted to do anything but. He made me a better person simply by just being himself. I know he knows all of those things so I don’t have that regret in my heart. I just wish I had more time to list him as my emergency contact because I sure could use one of his hugs right now.